I have a lot more time now to do “stuff.” We all do. All of us are at home lately doing stuff. Or should be anyway, unless we are first responders. Most of our neighbours around here are retired and just like the rest of the neighbours in our culdesac, our house is looking like we are getting ready to sell it. Problem is, that with all that is going on the real estate market is pretty much in the tank. So I guess I’ll keep the house … Brenda will be glad to hear that.

I ordered fifteen yards of bark mulch three weeks ago and had it placed on my driveway. My landscaper that did the yard when we built the house told me that I should get fifteen yards. I questioned the amount, but ordered it anyway. After all, he’s the expert, right? So the landscape supply company delivered my mulch …  dark fine was what I ordered and received. Before the driver got there I carefully laid down my tarp on the driveway. Asked the driver to do his best to dump the load on the tarp. He gave me what looked like a wry smile, and said he would do his best. The results of his aim are in the pictures below. At least he hit the driveway. As you can see, there actually was a tarp there under the pile. 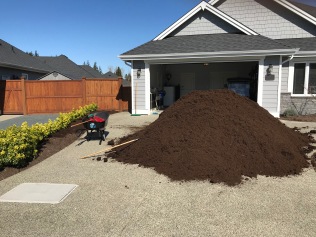 Turns out I only needed about eight of those fifteen yards. Two of my neighbours were the lucky recipients of a phone call from me and an invitation to come and have a go at the pile in my driveway. I asked them to just to make sure they used their own wheelbarrow and shovel, and they take turns at the mound while socially distancing. Twenty five hours later I found my tarp again.

Until next time … K.

Live life with no excuses, travel with no regret.

Martha Ann Kennedy's Blog, Copyright 2013-into perpetuity, all rights reserved to the author/artist